A Task is any step, process or action that describes what has to happen, e.g." Concept development for review with client" or "Write strategy document".  A task may take a long time or be completed relatively quickly - the time-frame is  not important, the tasks define what has to be done to get the job done.

Most tasks will have a Budget that is based on the value of the effort required to complete the task.  If the work is performed internally the value will likely be based on the Charge Rate for the Kind of work performed. Some tasks won't have a Budget as they are milestones like "awaiting client approval".

The above image shows 6 tasks:

The status of a task defines a meaning that informs the user "where" the task is up to.  In JobBag we have 5 core task Status Groups that define the the following:

Refer to the article on Using task status in your workflow for more information on how to use your own statuses.

Why have Task Status Groups?

The Status Groups define the core behaviour for any task status within that group but they don't always provide enough flexibility for describing the where a task is up to or used for.  E.g. the Pending status is useful for communicating that this is a task that will be worked on in due course but isn't ready to be done now.  No timesheets can be recorded against a task with the Pending status.

That same meaning can be really useful for holding the budget for a large task that will take place over a long period. One example is for a task that defines a role or series tasks that will be created over a number of weeks or months. The main task will hold the budget and track the overall spend, sub-tasks will be created as the job progresses, allowing you to book resources more effectively by day(s) or week(s).  Refer to the page on Managing Tasks That Go On Forever. 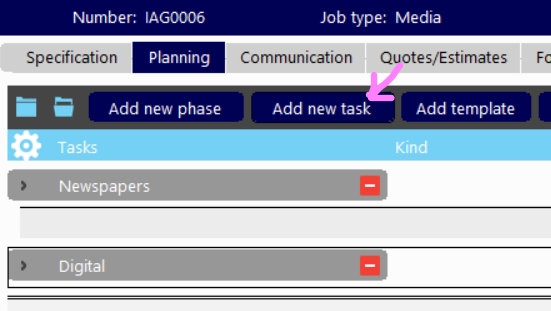 This triggers the Create Task dialog. 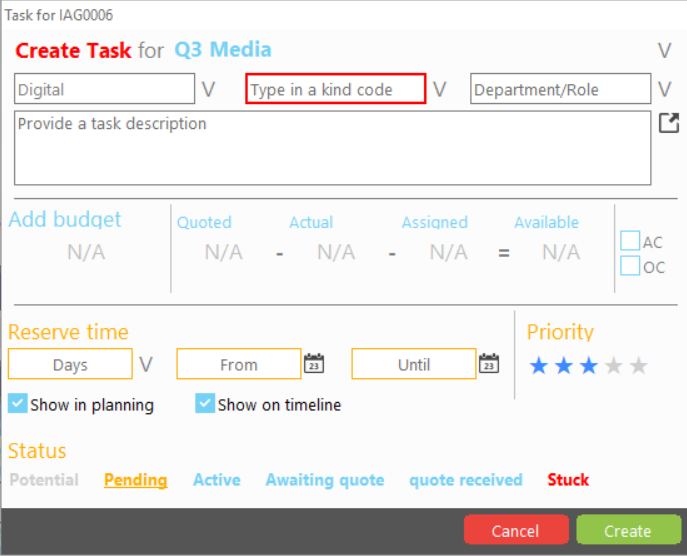 A Task can contain Sub-Tasks. This is what a Sub-Task looks like:-

Use the left and right carets to change a task into a sub-Task of the one above it.

Tasks can be assigned to specific people, roles, departments.

They can also be assigned to no one, or more than 1 of the above.

When a task is assigned to more than 1 person, it shows up in each person's calendar and task list.

A task can have an amount of time (and thus $ value) planned for it.

For example, this task has 1 hour planned, which is the equivalent of $200.00 in value (determined by assigned employees' charge rates.

It is possible to use just the Days column, but this means there will be no costs for that Task.

Eg., if a task budget is 3h, and a sub-task with a budget of 1h is created, the original task will display 2h (3h - 1h) and the total task will continue to contain 3h.

Hold the Shift key down, click to select the three dots to the left of Task Description field. Drag to another row to Duplicate the task.

Click within the task description field to trigger editing mode.

Click on the red button next to the Task Description to delete the task.

If time has been logged on a Task, and the Task is deleted, the timesheet is moved to the Phase that the Task is in.

If time has been logged on a sub-Task, and the sub-Task is deleted, the timesheet is moved to the parent Task.

Error: "You can't delete this Task unless you delete all child Tasks"

This error displays when a user attempts to delete a parent Task when there is time logged on one or more child Tasks. Delete each child task so that the timesheets are moved correctly.

Was this article helpful?
Thank you for your feedback! Our team will get back to you
How can we improve this article?
Your feedback
Comment
Comment (Optional)
Character limit : 500
Please enter your comment
Email (Optional)
Email

By entering and using this site, you consent to the use of only necessary cookies to enhance your site experience and improve our services.